When watching The Voice, The X-Factor or Britain’s Got Talent, many viewers don’t think about what actually happens to the sets when the series comes to an end. Instead of simply leaving them in the studios until the next season is filmed, they are often dismantled and taken to storage. That’s what specialists like Set-A-Side Storage from Oxfordshire in England are for.

Andy Beales, owner of Set-A-Side Storage, talks about the beginnings of his company: “For about 25 years, I worked for various TV production companies, such as BBC and ITV, in London as a prop master for films and television series. It was my job to see what could be done with the props before the next series. At that time, there was no place to store the sets. So, I founded Set-A-Side Storage to provide that space. I continued working as a prop master until my company grew bigger. When I left television, we had a contract with BBC and took care of the storage of all their sets. And other production companies like Channel 4, Universal Films, Warner Brothers and Disney quickly became our clients.” 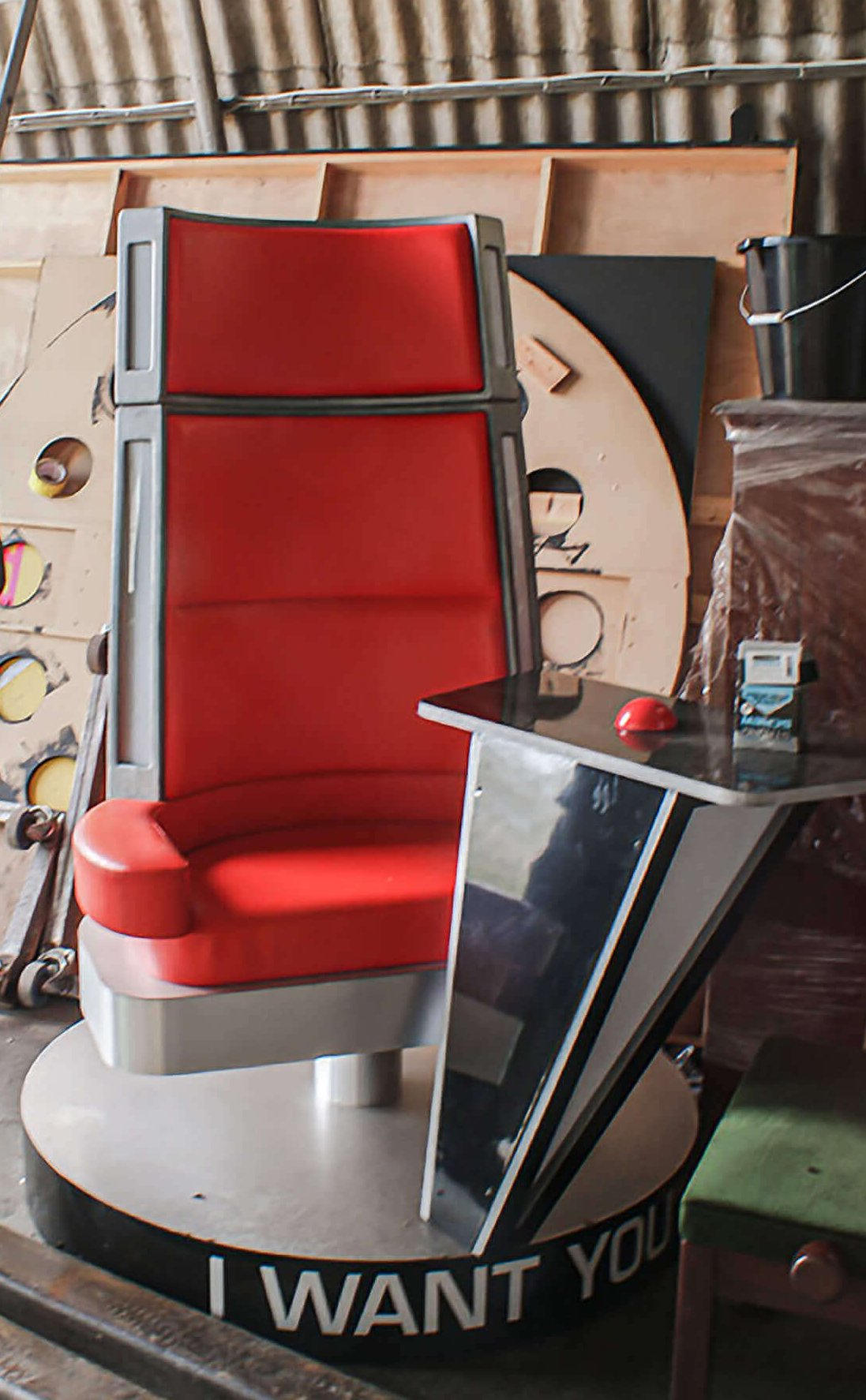 Site manager Steve Gardiner with a „The Voice“ judge’s chair

For television programmes, the production companies work cyclically. The sets are used for about three months and stored for the remaining nine months of the year. However, the film studios, especially the American ones, work differently. After shooting is completed, the film is edited in the USA. If scenes need to be shot again, they return to the UK. That’s when they need the original set. At Set-A-Side Storage they can look through the sets and decide which parts are needed for the shoot. After shooting is finished, the set is then returned to Oxfordshire and stored.

But even then, it can happen that customers drop by the storage specialist again. Company founder Beales explains: “Before a new season of X-Factor, the producer comes to us with the set designer and stage manager to go through all of their props. At the end of the series, just before Christmas, they bring everything back. Then in the new year, they come over to sort out and dispose of what they don’t need anymore.” 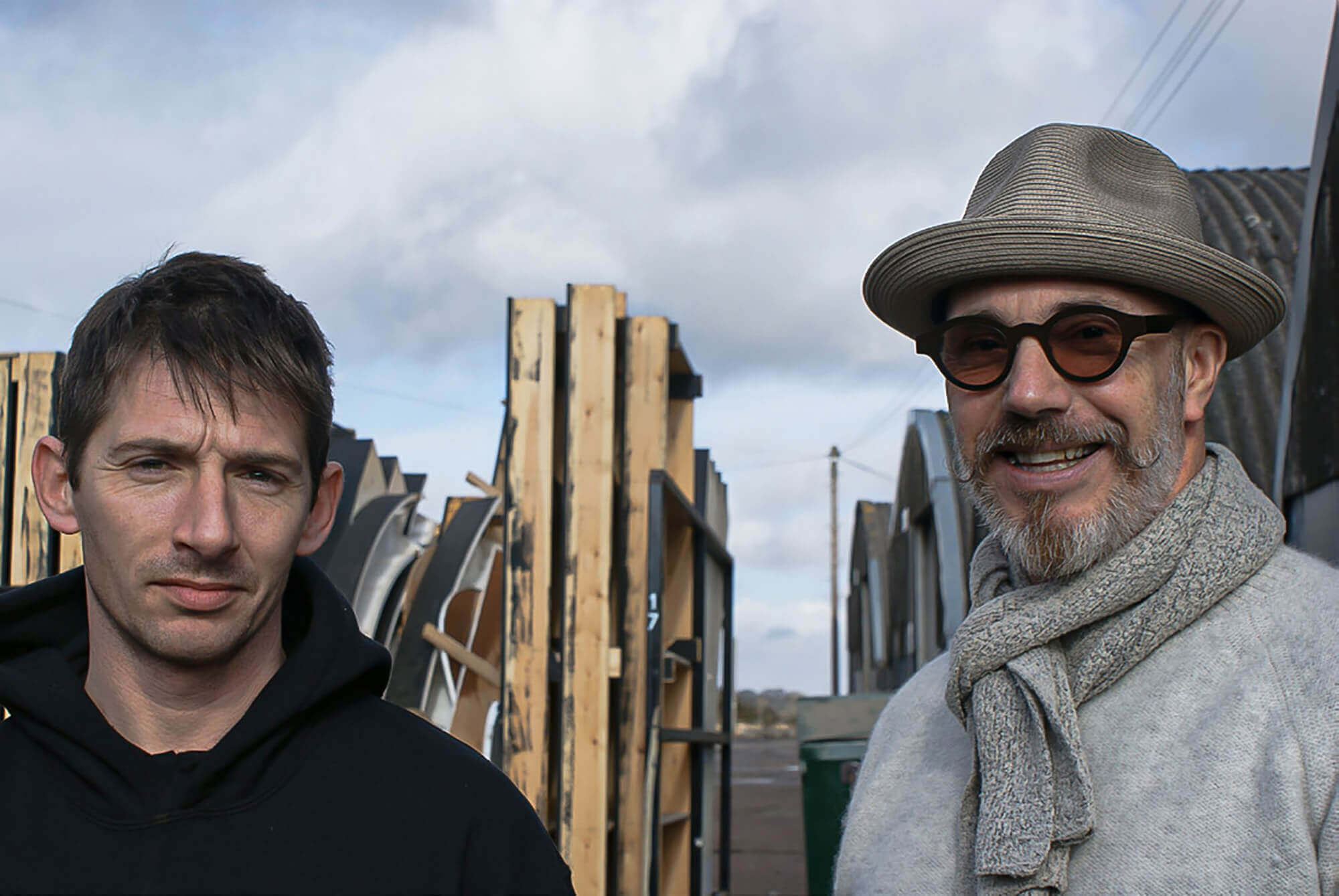 Unwanted props are made of a variety of materials, for example chicken wire, fibreglass, plastic or carpet. However, the majority of the backdrops are still made of wood. At first Set-A-Side started recycling unwanted materials by simply separating them. “Disposing of the wood became more and more expensive and since this is part of our service, we put quite a lot of money into this process. We tried different options, such as a small mobile shredder that we took to different locations. But in the end we decided to do the disposal properly,” says the former prop master. 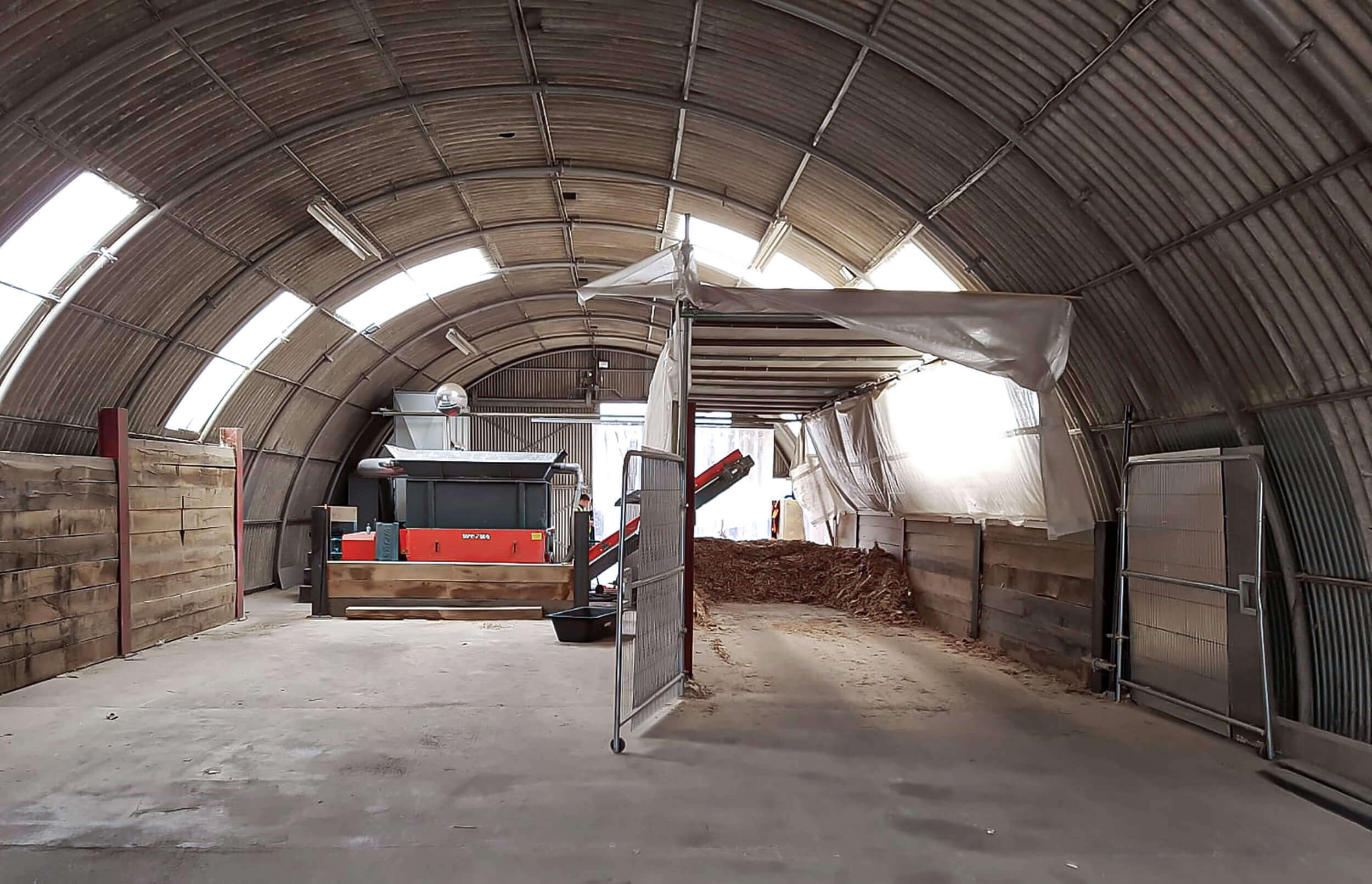 In 2016 the team decided to invest in a shredder. Beales and his partner first learned about shredders and then visited three companies that import the machines. “We chose a WEIMA shredder from Fercell because the machine fit our requirements perfectly and because Fercell was always helpful and could answer all our questions.“

Once the choice of shredder had been made, Beales and his team studied how they could set up the area around the machine to create an efficient system for feeding the material into the shredder. With the help of Fercell, they were able to find a tailor-made solution: The shredder is powered by a three-phase power generator and fed by a JCB. The wood chips end up in a container and are finally sent to a company that recycles the material for energy. 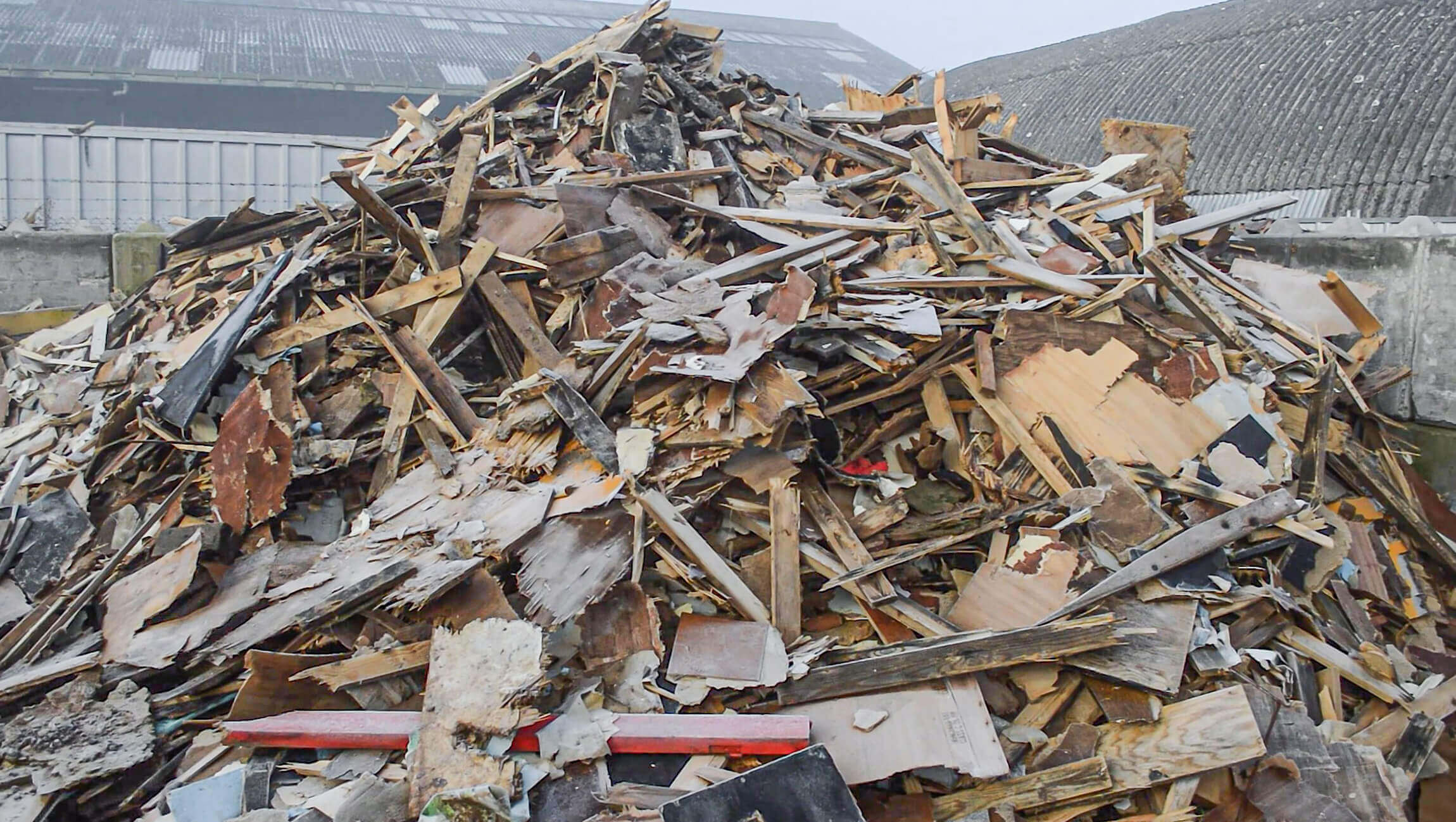 “The machine crushes everything we put in. Whether it’s a 12-foot tree, telegraph poles, railway sleepers” 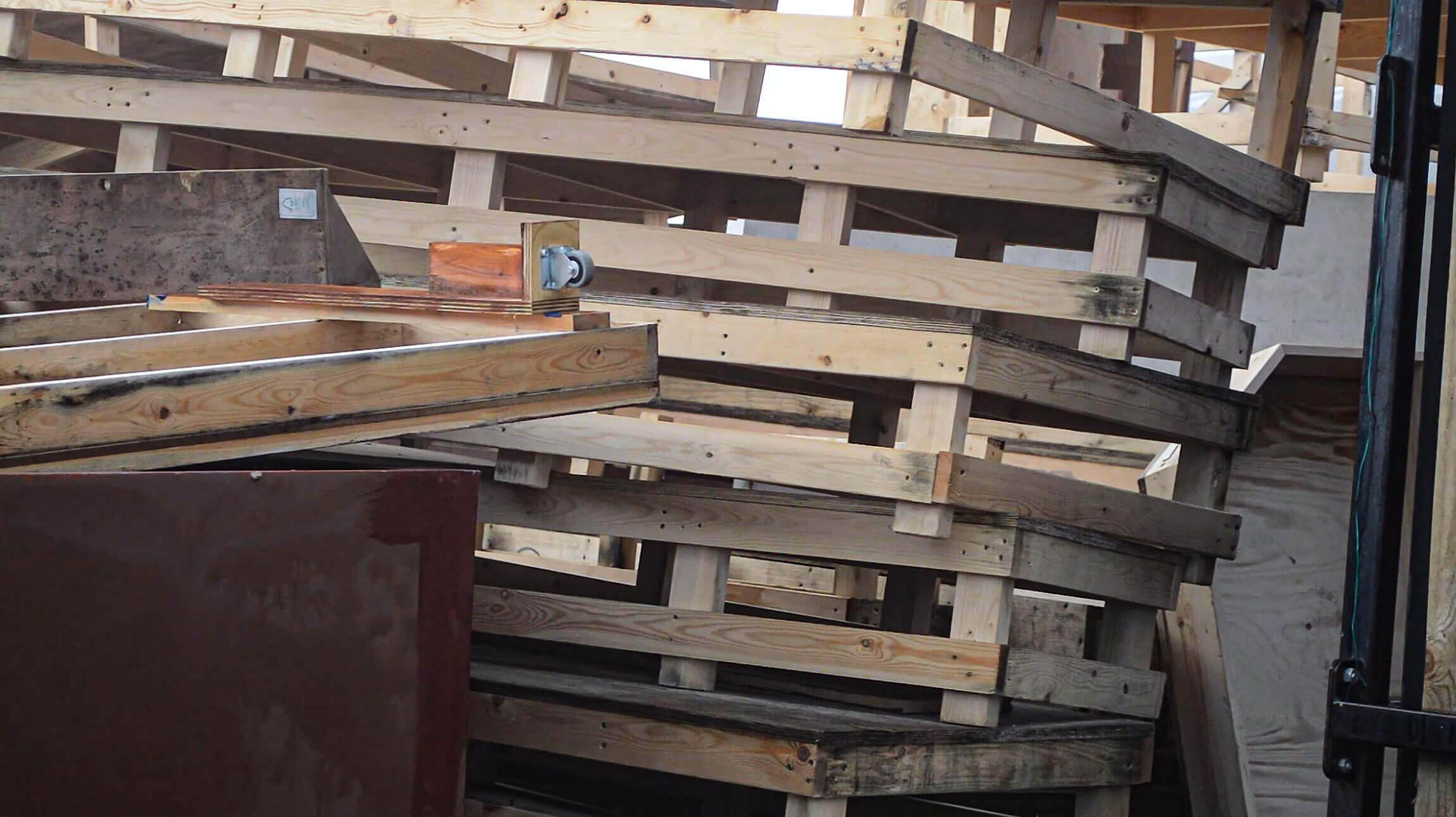 Large sets are shredded as well

“In the long run, it’s all about how we grow. With the WEIMA shredder we can expand the company even further”, comments Beales. “The machine crushes everything we put in. Whether it’s a 12-foot tree, telegraph poles or railway sleepers – it simply shreds everything. The process takes only a few seconds. In minutes, an entire stack of wood can be turned into space-saving wood chips,” explains Steve Gardiner, site manager at Set-A-Side. 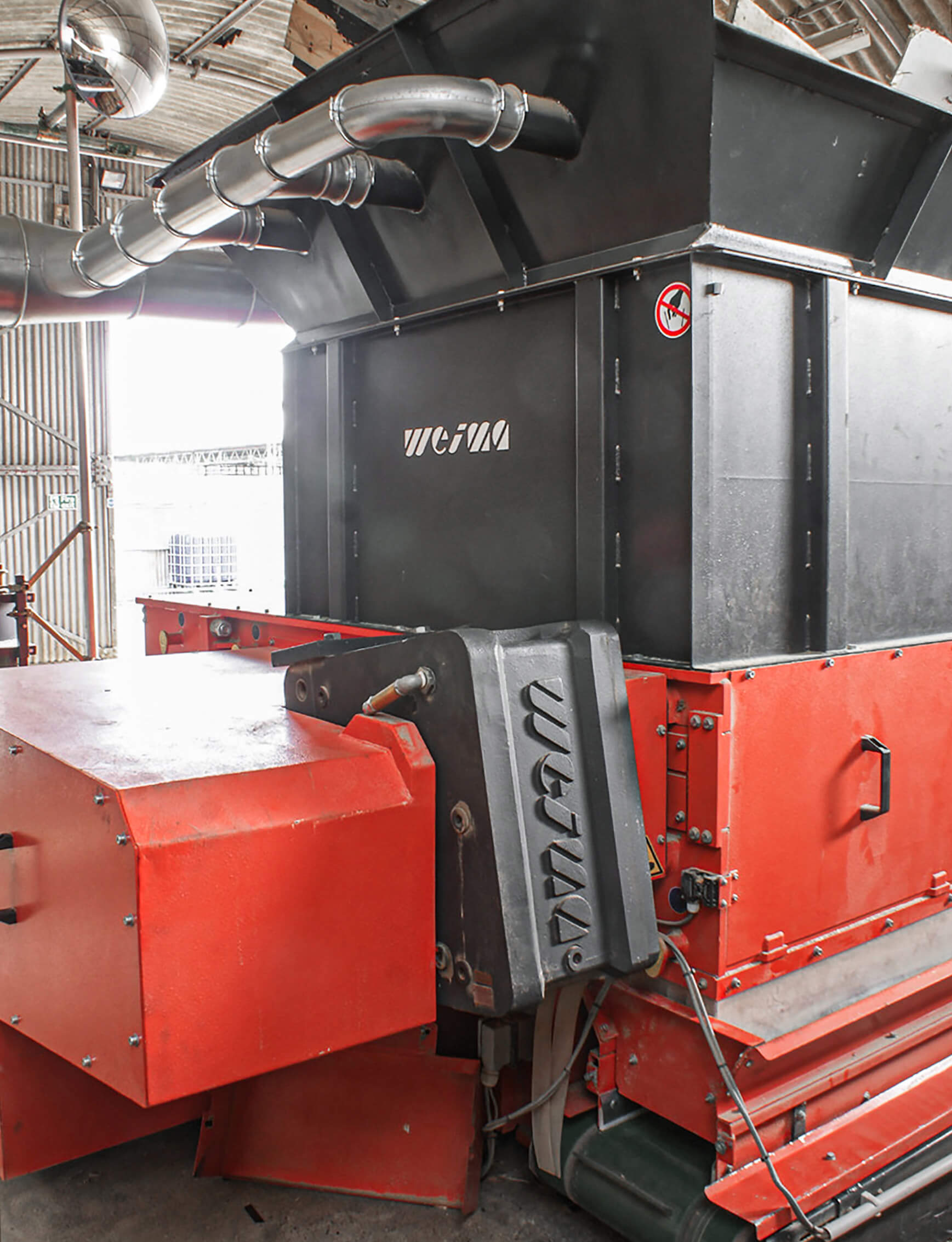 The shredder selected by Set-A-Side Storage is a WEIMA WL 20 single-shaft shredder. In the wood processing industry, where high output quantities are required, Set-A-Side is optimally equipped with the WL 20. With the 2,000 mm wide V-rotor and the WAP gearbox with outputs of up to 110 kW, wood waste of all kinds can be shredded without any problems.

“We often put the shredder to the test, and it has never let us down.”

The shredded wood is transported into the bunker via conveyor belt

The material is fed through a hopper and falls in front of a hydraulically operated ram, which transports the material horizontally to the rotor. The material is then shredded between the rotor and the fixed stationary counter knives. The chips can be conveyed by a screw, an extraction system or a conveyor belt. Set-A-Side has opted for a conventional conveyor system with a discharge height of 2.5 m. This transports the shredded wood into the chip bunker. In order to protect the chips from contamination, the Set-A-Side team built a scaffolding with plastic sheeting to allow easy access to the bunker.

Would Beales consider buying another machine from WEIMA? “Yes, I would. We put the shredder to the test a lot and it has never let us down.”