Industry events can be sustainable!

The Destroy Responsibly (TM) program by WEIMA aims to reduce the environmental impact of large exhibitions. Frequently at these events, machinery demonstrations on the tradeshow floor generate significant waste that is typically thrown away at the end of the show. WEIMA stepped in to divert some of that wood waste from a landfill so it can be given a second life.

WEIMA began the Destroy Responsibly (TM) program at the International Woodworking Fair in 2008. Since then, the program has been adopted by the AWFS Fair, which is held every other year in Las Vegas, Nevada. A WEIMA single-shaft shredder is set up and in full operation behind the show hall, and Freeman workers will be collecting the scrap wood from booths throughout the four day event. Exhibitors and attendees are encouraged to follow the green carpet and head out back to watch it shred.

"Exhibitors who are able to see their wood waste going through our machine here on the show floor are able to see how a shredder would fit into their operation. Destroy Responsibly means size reducing your waste-- in whatever form that is-- in a manner that's going to be responsible. It is important not only for the environment, but for a business owner to see that it can be done in a financially responsible way."

Wood waste is often bulky and hard to move around. Shredding that scrap clears up space within an operation that is valuable. In 2019, the AWFS Fair was able to drop the amount of wood waste from 200 cubic yards of debris to 30 yards of debris. WEIMA partnered with Repurpose America, a non-profit organization that works to educate the community about sustainability and the environment. Repurpose America coordinated the donation of the shredded solid wood waste to the agricultural program at the University of Nevada at Las Vegas to be used as ground cover and in compost. 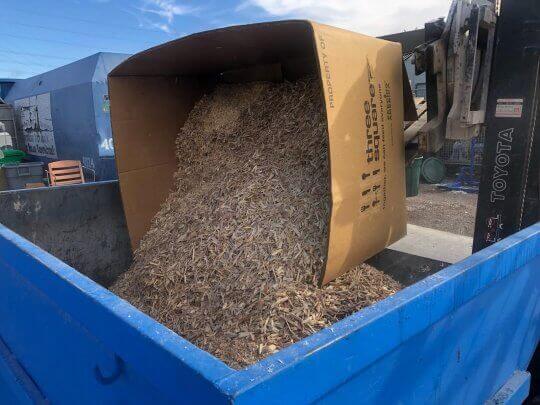 The shredded wood from the tradeshow floor is loaded into a dumpster for delivery to UNLV.

The Destroy Responsibly (TM) program is not just for the wood industry. Plastics industry events benefit from on-site recycling technology as well! In 2018, WEIMA partnered with PLASTICS, Freeman, and Commercial Plastics Recycling to initiate the program at NPE: The Plastics Show. A WEIMA WLK 13 single-shaft shredder was installed behind the tradeshow hall in Orlando and was running throughout the show's duration. The shredder was part of a two-stage system, meaning it was connected by conveyors to a granulator and air system for proper size reduction. Once the granulate was created, Commercial Plastics Recycling was able to take it to their facility to be processed and sold as post-consumer resin. This resin is used to make new products that we use every day, giving what would traditionally be considered trash a second life. 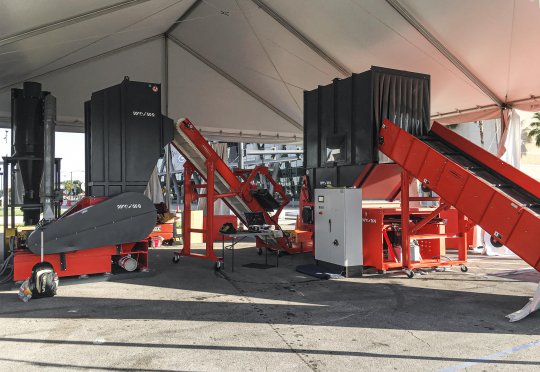 We want our customers to love their WEIMA machine and to feel good about the service they receive—that’s what keeps us going. We also work hard to ensure that, when it comes to service and expertise, WEIMA is the provider that marches at the head of the pack.

Ten years of success... and counting!
01

WEIMA was approached by the International Woodworking Fair (IWF) as a possible solution to the overwhelming wood waste after their biennial tradeshow in Atlanta, Georgia. The machinery demonstrations are a highlight on the show floor, but they generate a lot of scrap wood. The IWF team felt that there was a better way to handle this, and a greener way at that. The Destroy Responsibly program is born!

WEIMA set up a WLK15 single-shaft shredder behind the Georgia World Congress Center during the show and shredded the wood scrap from the demonstrations in real time. This resulted in fewer dumpsters needing to be hauled off after the show and some was reused as ground cover. This saved the show organizers so much money in haul-off costs as well.

The U.S. sustained a significant economic crisis in 2008, affecting manufacturers nationwide. Fewer companies exhibited at woodworking shows between these years, which meant there wasn't as much scrap wood being generated at the trade fairs.

As the housing market regained its momentum, more tradeshows began to see the value in saving money where they could. Haul-off costs and landfill fees were reduced by decreasing the number of dumpsters that were filled and transported at each tradeshow. The AWFS Fair (Association of Woodworking & Furnishings Suppliers) asked WEIMA to head out to Las Vegas for their biennial woodworking tradeshow, and they wanted WEIMA to bring the shredding system with us! So we did.

The WEIMA team worked closely throughout these years with AWFS to bring the Destroy Responsibly program back to each show. The process is perfected with each year's event.

The PLASTICS team (formerly The Society of Plastics Industry) got wind of the Destroy Responsibly program and approached WEIMA about altering it a bit to fit the plastics industry. A two-stage plastics shredding system was assembled in the parking lot behind the tradeshow and plastic scrap that was created during the show was brought out back. The two-stage system consisted of a WLK13 single-shaft shredder, an LM granulator, conveyors and an air system. Commercial Plastics Recycling (CPR) out of Tampa, Florida, transported, washed, and reintegrated the regrind into the plastics market.

WEIMA returns as the Official Recycling Partner for the AWFS Fair 2021! Follow the green carpet in the brand new West Hall at the Las Vegas Convention Center to see us shredding in action!