Manufacturing recycling equipment comes with a responsibility to step up when it comes to reducing waste. WEIMA, in conjunction with PLASTICS and Commercial Plastics Recycling Inc., created an on-site plastics recycling shredding solution for NPE2018, demonstrating that trade shows can also benefit from going green!

WEIMA has been an exhibitor for years at NPE shows, but in 2018 they joined forces with PLASTICS and Commercial Plastics Recycling Inc. (CPR), to make a lasting impact and reduce waste. 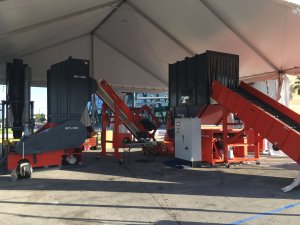 CPR collected tons of scrap material from the show floor at NPE2015– 190 tons to be exact. With this in mind, the PLASTICS Industry Association (formerly SPI) set out to find a greener way to handle so much scrap. Historically, CPR had hauled off the scrap in its original form to their recycling facility in Tampa, Florida. Transportation costs to remove the scrap were high, however, because larger scrap required more trucks. PLASTICS set out to find a way to reduce the size of the scrap prior to moving it from the Orange County Convention Center.

Thousands of bottle caps were among the scrap shredded at NPE2018.

That’s where WEIMA comes in to the story. The size reduction manufacturer supplied a two-stage WEIMA plastics recycling system– including a WLK 15 single-shaft shredder, an LM granulator, air system, and conveyors– to PLASTICS for use during the show. Representatives from CPR collected scrap generated on the show floor and sorted it in a pre-determined staging area in the lot behind the West Hall. The two-stage system processed the material in batches. CPR staged the shredded plastic in an adjacent tent and prepared it for shipment to their recycling headquarters.

PLASTICS invited show-goers to come watch the plastics recycling demonstration during show hours. “We processed everything from ATV dashes to margarine containers to bottle caps,” said Chad Ames, Regional Sales Manager for WEIMA. Ames, along with WEIMA service technicians Joshua Gulnac and Charlie Furches, ran the machines throughout the show. “The scrap just kept coming, so we kept shredding.” Even when the typical afternoon Florida rain storms came, Ames reported with a smile– “We stayed focused and had a blast!” 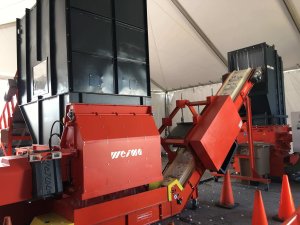 The reduction of plastic scrap made a big impact at NPE2018. Paul Benvenuti with CPR reported that his employees collected upwards of 380,000 pounds of plastic scrap from the show floor. While this is comparable to the amount collected at NPE2015, Benvenuti noted that fifteen fewer trucks were used to transport the scrap back to CPR’s headquarters in Tampa after the show.

WEIMA was honored to be a part of the plastic recycling process at NPE2018 and is looking forward to joining forces with CPR and PLASTICS again in the future.