Information on the processing of crop plastics such as silage films, wrapping films, bale nets, stretch films and nonwovens.

In recent decades, the use of agricultural films in farming has been steadily increasing. The agro-film market is predicted to grow steadily until 2030. This is not only due to the increasing demand for food and thus feed, but also due to decreasing arable land, increasing soil conservation and increased cost efficiency through the use of films.

Currently, there is no alternative for agricultural film and the increasing consumption results in ever growing amounts of film waste. Resource-saving use can only be achieved by efficient film recycling. This is where WEIMA shredders come into play. All plastic waste must be shredded to a homogeneous size in the first recycling step. WEIMA draws on a wealth of experience in the material processing of post-consumer agricultural films.

WEIMA customer installations for agricultural film applications can be found worldwide. Our references include well-known companies such as CEDO Recycling in the Netherlands and Plastika Kritis on Crete in Greece.

Why are agricultural films used?

Agriculture films have significant advantages. Films for agricultural use create the ideal conditions for microclimate. Plant growth can thus be considerably increased. They reduce the need for chemical fertilizers, pesticides and herbicides. This leads to higher plant productivity through higher yields. In addition, weeds, insects and diseases can be controlled in a targeted manner. 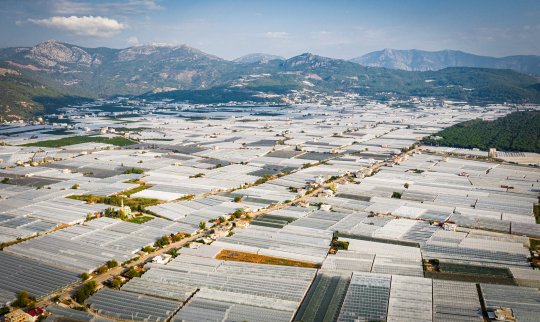 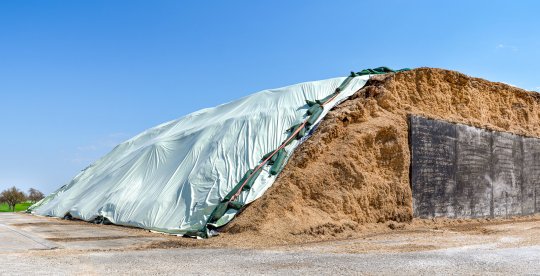 What material are agricultural films made of?

Agricultural films can be manufactured from various thermoplastics. Depending on the material requirements, the composition can be made from different masterbatches and compounds. In addition, additives such as UV absorbers or UV stabilizers can be added to further optimize product properties.

Comparatively high quantities of plastic waste are generated, especially during harvesting periods. Films, usually delivered in bales, are often a diverse mixture of different polymers. These have to be separated into their various fractions. In addition, the used films are usually still very damp to wet and heavily contaminated, for example with soil, stones and metals. Transport in bale form makes it difficult to determine the degree of contamination. Organic matter that sticks to the film after silage or harvesting is often already rotten. This also impairs processing.

Recycle agricultural and farm film instead of burning or landfilling

Many thousands of tons of agrofilm waste are generated in Germany every year. For a long time, there was no alternative to landfilling these valuable residual materials or burning them in waste incineration plants. Not only in Germany, but also in many other countries, landfilling has been restricted. This has led to increased demand for sustainable recycling solutions for crop plastics. 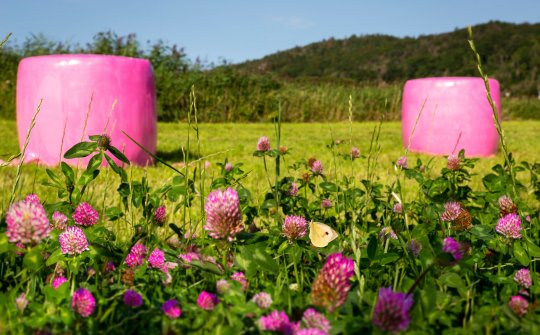 With the initiative ERDE (Erntekunststoffe Recycling Deutschland), farmers, contractors and film manufacturers have joined forces to offer a take-back solution for agricultural film and close the recycling loop. In order to hand in used agriculture film, film waste must be roughly freed of dirt and sorted. The film waste can then be dropped off at one of more than 1,000 collection stations. The film is then recycled.

The return of agricultural film to ERDE is not free of charge, but farmers save between 30 and 50% compared to conventional disposal.

Film recycling with WEIMA PreCut shredder at CEDO in the Netherlands

Did you know?
In 2019, the ERDE initiative recycled more than 20,500 tons of agricultural film. The CO₂ saved corresponds to an amount that two million trees can bind annually.

How does the shredding of crop plastics work?

When agricultural films, stretch films or greenhouse films arrive at plastic recyclers, they are often heavily contaminated due to their previous use in fields. Vegetables, crops and covered feed leave their mark. Soil, sand and sometimes metal parts and stones in particular have contaminated the films. The foreign matter is a particularly big challenge for the first step of the recycling process: shredding with WEIMA shredders. 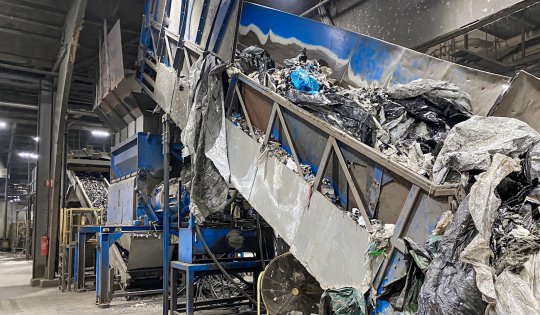 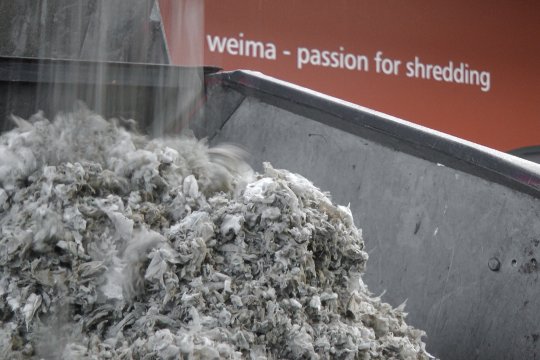 In addition to a robust shredder, the complex processing system also includes appropriate separation technology such as metal separators or metal detection. Thanks to the large feed hoppers, even voluminous materials in bale form or loose can be fed without any problems. Manual preparatory work is not necessary due to the robust machine design. Typically, agricultural films are shredded to a particle size of 60 - 80 mm. This is ideal for the further process – for example washing, drying and extrusion.

Why agriculture is becoming plasticulture

The progressive modernization of agriculture with the increased use of plastics such as films has led to the fact that today we speak of so-called plasticulture. Advantage: Much more food can be produced. Disadvantage: The amount of film waste is constantly increasing.

But there is already a solution for this, too. By using increasingly efficient shredding technology, it is possible to further increase the recycling rate. This conserves resources and nature, and also makes the farmer happy. 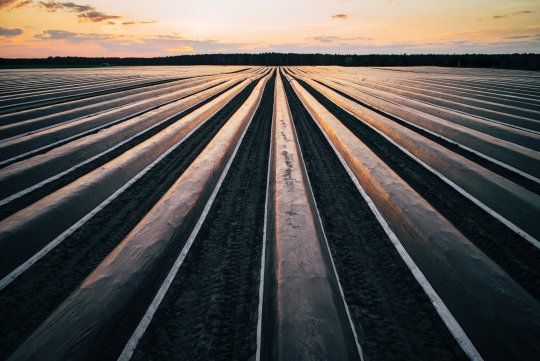 This is what makes film shredding so challenging:
Only half of the material delivered is actually film. Contaminants such as soil, stones, sand and feed residues account for over 45 percent.

In line with the circular economy, the regranulate produced with WEIMA shredding technology can be used for the production of new agricultural film and construction film, but also for the production of fences, hoses and garbage bags. Closing the film loop ensures that agricultural film does not end up as unused waste in nature, where it remains forever. In addition, many millions of tons of petroleum can be saved in film production. 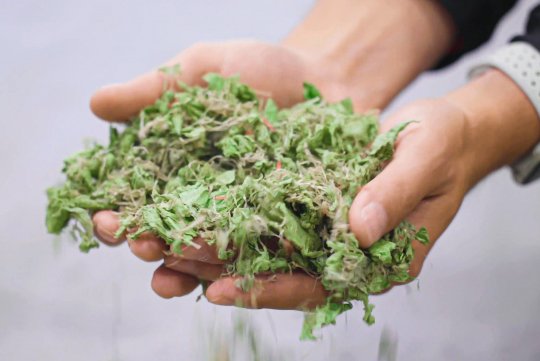 Did you know?
More than 65,000 tons of harvest plastics such as silage and stretch film, asparagus film, mulch film, baler twine and bale nets are brought onto the German market every year.

Example applications for the sustainable disposal of agricultural films 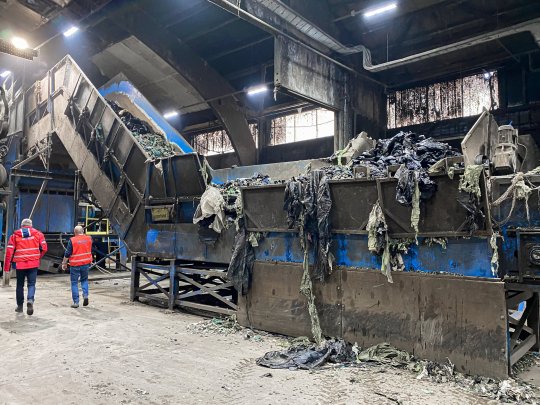 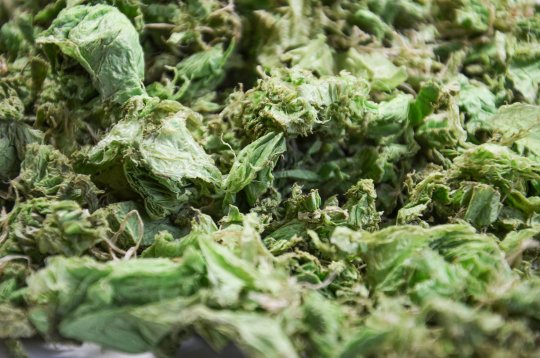 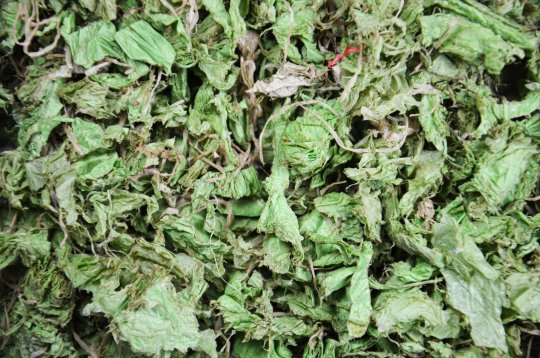 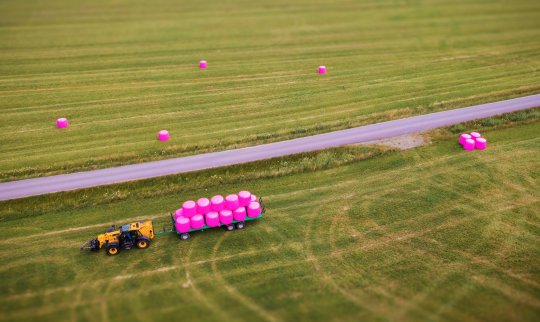 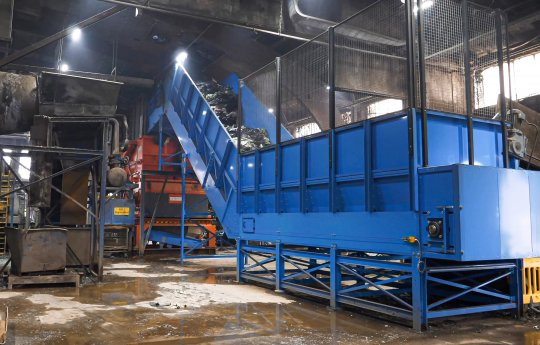 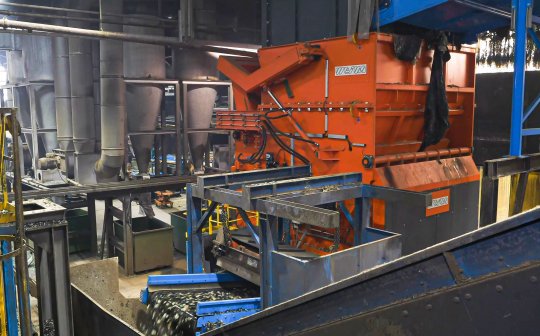 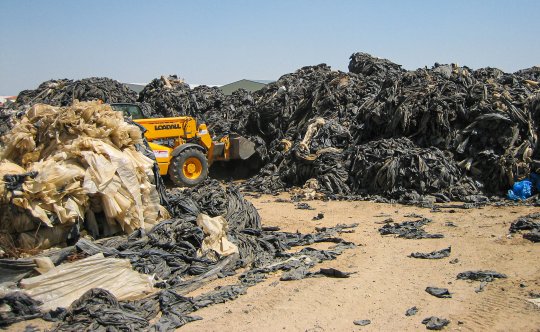 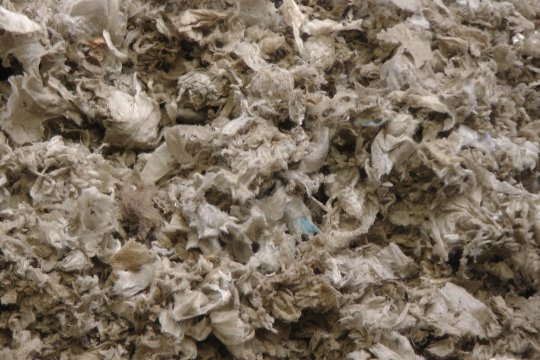 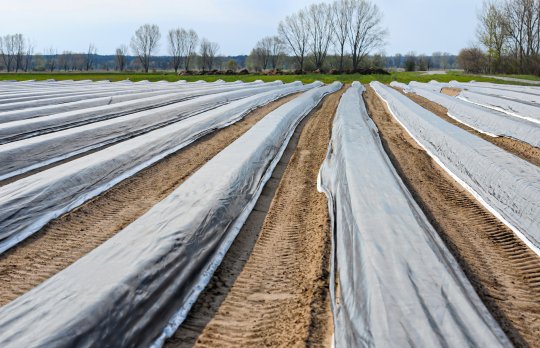 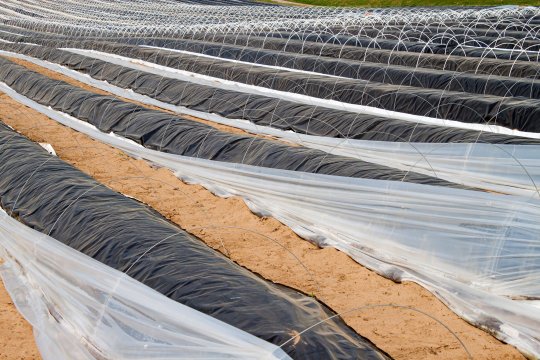 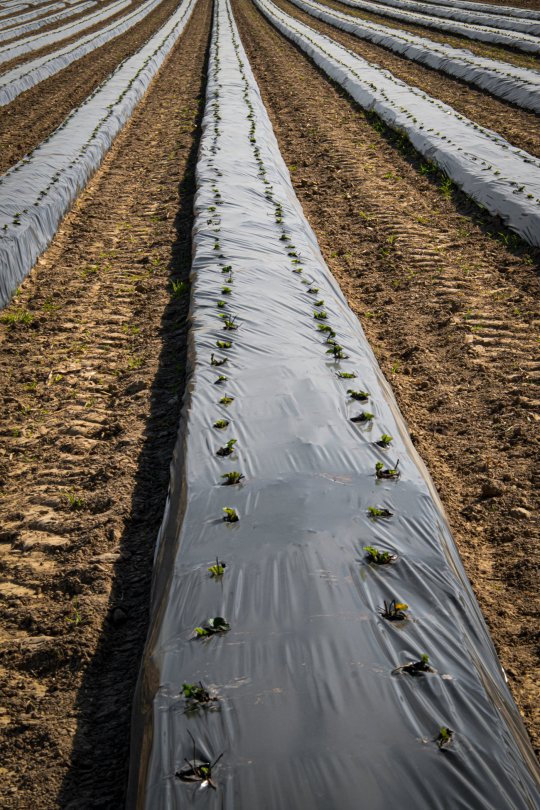 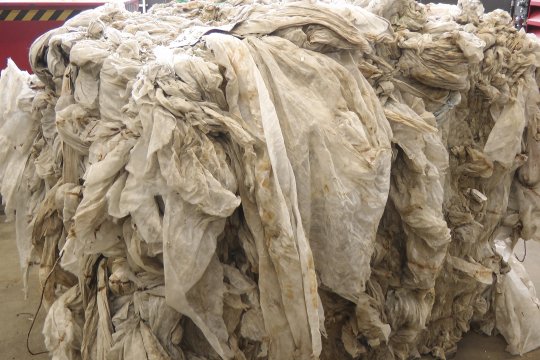 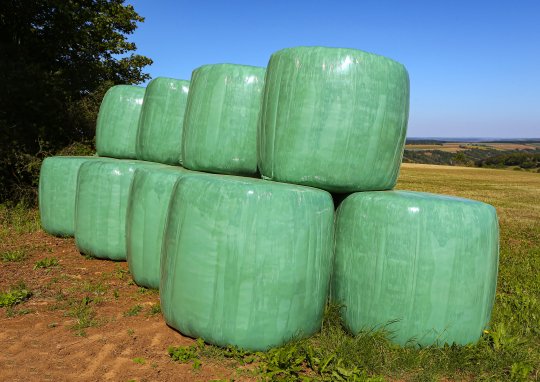 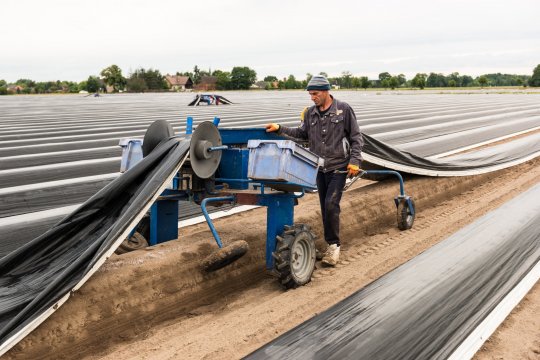 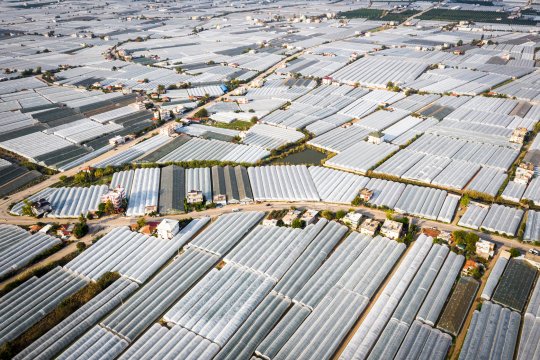 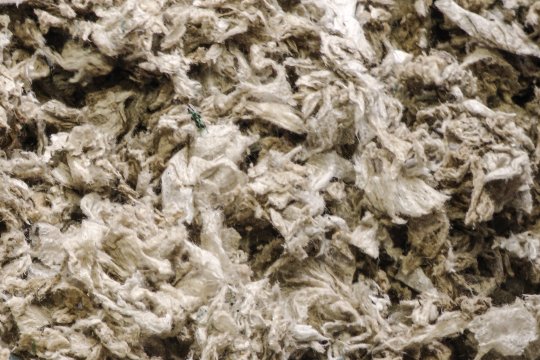 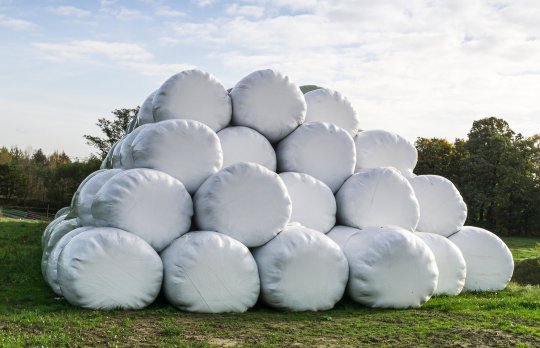 In addition to agriculture film, agricultural non-woven fabric is also frequently used on farms to ensure a good harvest even under extreme weather conditions. Early weeding nonwoven, weed nonwoven and frost protection nonwoven are made of high-quality polypropylene (PP) yarn and can usually be used for several years.

After that, they are recyclable, just like film, and are first shredded with the help of WEIMA shredders.

WEIMA shredders for processing highly abrasive materials can be protected with various options to reduce wear and thus downtime and maintenance costs. The heavy wall thickness of the machine frame makes WEIMA shredders particularly robust. The rotor can be reinforced with Vautid, the screen with Creusabro. To protect the cutting knives against the impact of foreign objects, large knives with edge lengths of up to 130 mm x 130 mm can be selected. If the number of knives is small. Vautid can also protect knife holders.

To avoid increased wear of the rotor face plates, we recommend the installation of replaceable Creusabro wear plates on both sides. The cutting chamber can also be reinforced and optionally lined with exchangeable Creusabro plates. Wear protection does not stop at the screen, which defines the material size. For particularly high wear, we offer a screen reinforced with Creusabro with a wall thickness of approx. 20 mm.

What is Vautid?
Vautid is a buildup welding material that can be applied to components as a welding alloy. In WEIMA shredders, Vautid with 62 HRC is applied.

What is Hardox?
Hardox it an abrasion resistant steel and is mainly used as wear plate with a hardness of up to 600 HBW. Depending on the requirements, different degrees of hardness can be applied.

With the WKS 1400-2200 series, you can shred anything: from hard, large-volume injection molding waste to tear-resistant fibers and films. The innovative inspection flap guarantees maintenance-friendly access. The swing ram optimizes material feed and thus the shredding result. 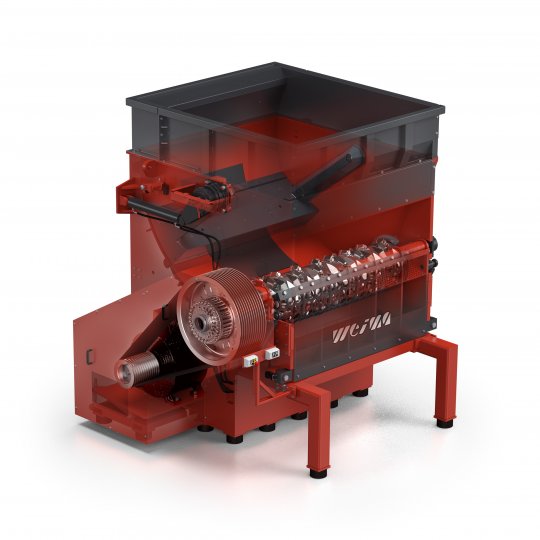 Developed for flat materials such as films: The F-Rotor

The optimum coordination of rotor, knives and counter knives is crucial for the shredding result. The selection of the components suitable for the material requires a high degree of experience. The F-rotor, specially designed for films, is characterized by its controlled feeding behavior.

By the way: For particularly abrasive or dirty materials, we recommend wear protection made of Vautid. 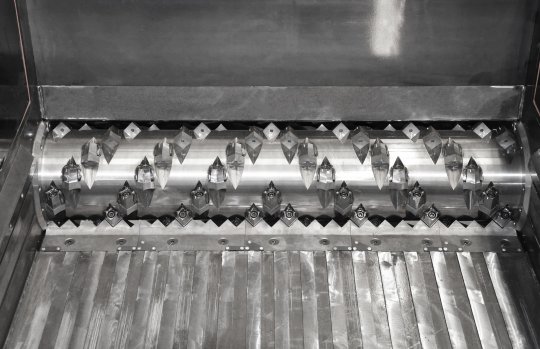 The PreCut 2000-3000 series is characterized by extremely high throughput rates. PreCut machines are often used as pre-shredders in multi-stage processing plants, but are also suitable as stand-alone solutions. Thanks to Vautid wear protection, the solid PreCut rotor is particularly resistant to foreign matter. Reinforced side walls make the frame of the shredder extremely solid. 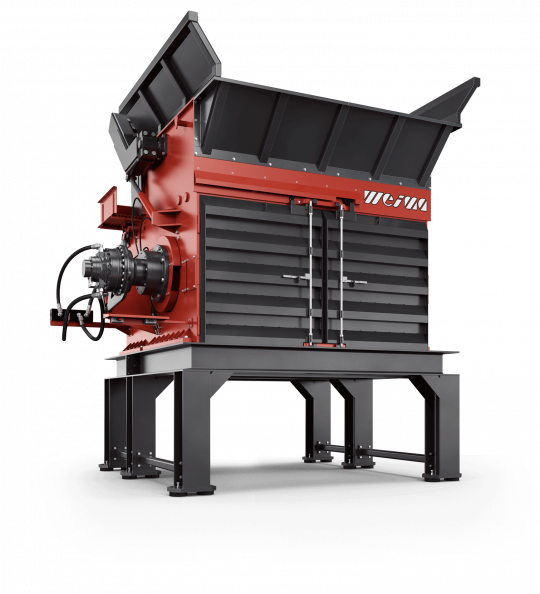 The machines of the PowerLine series are universally applicable. Variable equipment and sizes allow an exact adaptation to your special requirements. The counter knives are user-friendly adjustable from the outside and protected by an additional cover plate. 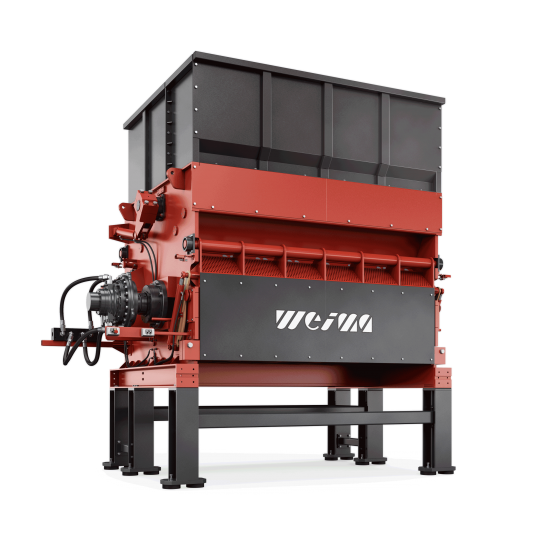 One of the most common drive options for single-shaft shredders is the electromechanical drive, which has proven itself thousands of times over. The power is transmitted by means of a standard motor, a specially developed WEIMA WAP gearbox and a V-belt. The speed can be flexibly adjusted.

The high-torque, multi-pole synchronous motor from Baumüller is produced in Germany and is characterized by its insensitivity to foreign bodies. Without gears, the drive resists shocks and vibrations and thus has a particularly long service life – even when shredding challenging material streams. 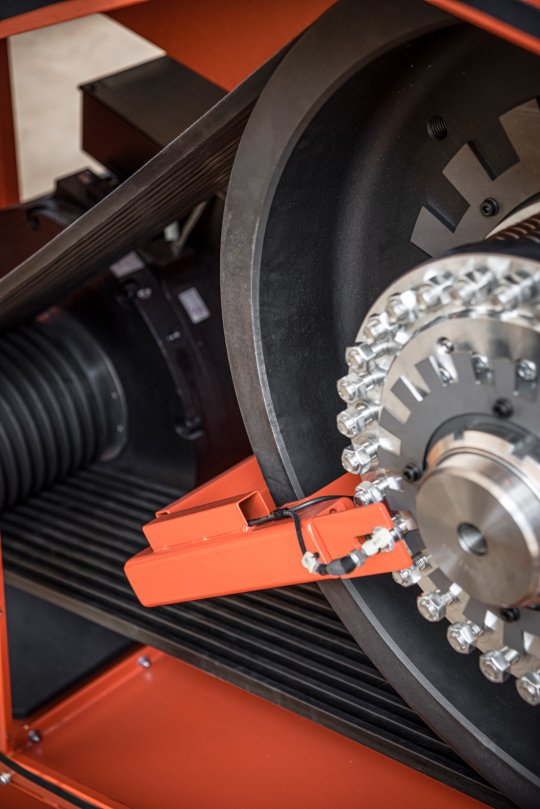 Hydraulic drives from Hägglunds / Bosch Rexroth have no gearbox and are therefore particularly insensitive to many contaminants. Speed and torque can be adjusted without current peaks. The robust drive provides high torque at low kW power. The speed can be variably adjusted by means of a regulating pump.

Many drive options
for maximum throughput 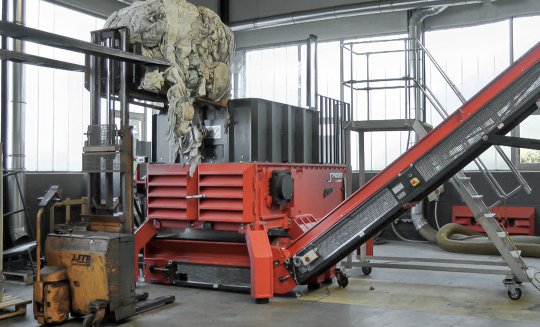 The WEIMA show room is equipped with shredding and briquetting machines of all sizes and technologies. This enables us to simulate your application as realistically as possible. You have the possibility to send us your material or visit us directly in Fort Mill. From our gallery you have the best view directly into the cutting chamber. So you can observe the shredding process live.

Alternatively you can send us material for testing.
Click here for the form.