Since only very recently the Augustinuswerk in Jessen has been producing wood briquettes under its own brand name of “Hol’z dir” in a separate workshop for the handicapped. Only machines from shredder specialist WEIMA are used for production, their own production facilities being only a few kilometres away in Großnaundorf.

It is very busy here. Every day 3,000 wood briquettes pass through the conveyor belts of the Augustinuswerk. Through further process optimisation we will soon bring that up to 3,500 a day. However, we are not only concerned about speed but, above all, about product quality. Each briquette is packed and checked individually by hand. Only then will it be part of the planned annual production of around 750 pallets with 960 kg. 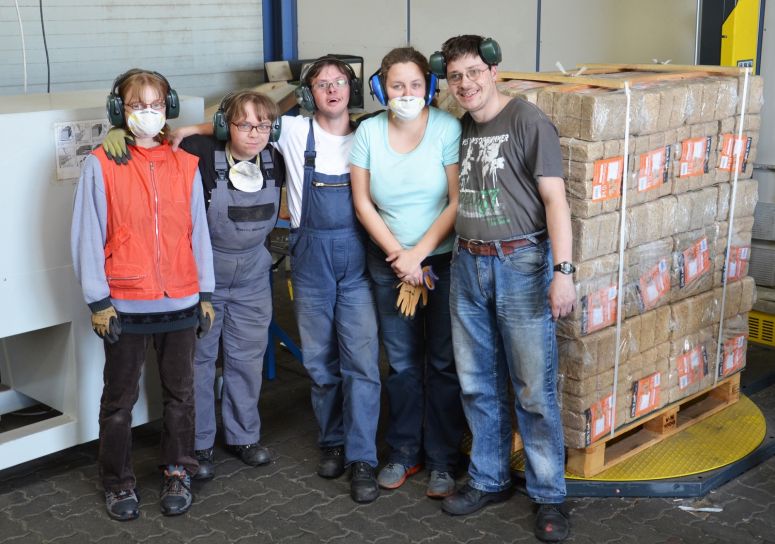 It all started at the turn of the century. Opened in 2000, the separate workshop in Jessen industrial park with its modern machine park for woodworking gives 73 people with various handicaps the capability to follow a profession. Working under the expert guidance of experienced carpenters and joiners, furniture is produced in addition to manufacturing wood products.

The production of pallets to meet individual customer requirements is another mainstay of the company’s business. The customers for these are primarily industrial companies in the Jessen area who have known and appreciated the Augustinuswerk for many years now as a reliable partner for assembly and packing. 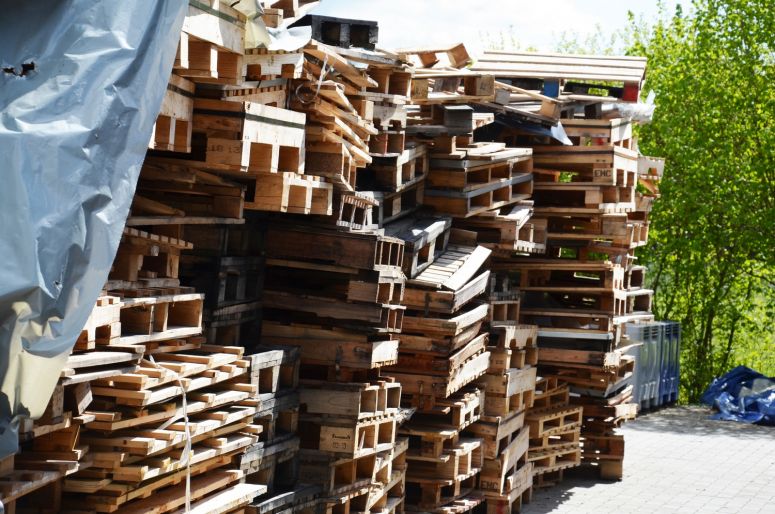 Picture 2: Pallets waited to be shredded

However, a problem quickly became obvious; what to do with the chips and sawdust produced in the woodworking? A solution was quickly found. Briquetting. But considerably more leftover wood was required to make production profitable. Up until recently the only alternative was expensive disposal as waste. We therefore made a virtue out of this situation. We looked at the companies in the vicinity and finally decided to taken in their old pallets for the production of briquettes.

When it became clear what kind of quantities were involved on a daily basis, and who would ultimately take the briquettes as a sales partner, we made a search for plant concepts. In doing so, the company chanced upon WEIMA Maschinenbau GmbH, who has devoted itself to the shredding and briquetting of wood waste for 30 years now. According to details from the Augustinuswerk, WEIMA provided a convincing three-level overall concept including an acoustic cabin, which makes working there considerably more pleasant. 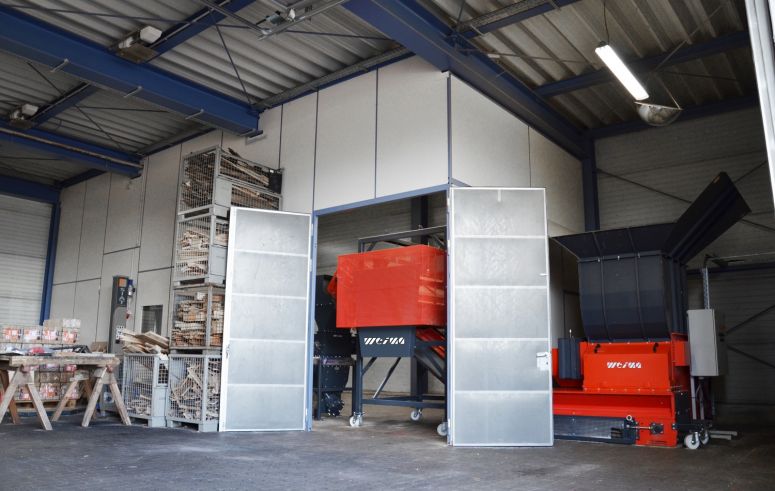 First of all, a WL 8 single-shaft shredder with a 22kW power rating was used, which pre-shredded down to a defined granularity of around 30 mm pallets that had been picked up by a forklift with the aid of a V-rotor that had been profiled and provided with cutting blades The wood chips then go into a WHM 600/350 hammer mill via a discharge conveyor belt. In order to ensure that foreign matter from the discarded pallets does not get into the hammer mill, a magnet above the conveyor belt separates out nails and the like. The material is then shredded again down to a size of around 8 mm so that it can pass into the chips tank of the briquetting press via the spiral screw conveyor. 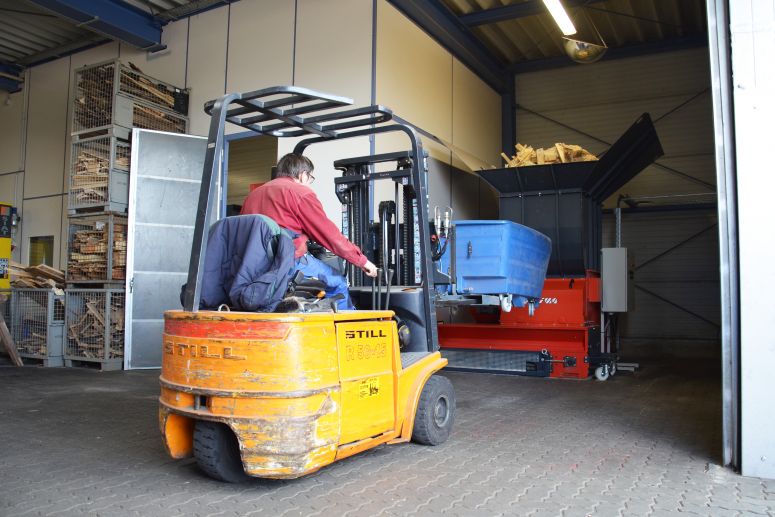 The TH 1500 has an especially powerful mould press unit that allows wood briquettes of an extremely stable shape to be discharged bidirectionally. The axial piston pump of the hydraulics is driven by a 30 kW motor and produces nine briquettes a minute – of course, without using any adhesives or binders. The movement sequences of the massive main cylinder and the moulds are monitored and controlled by a path measurement system. This makes exact positioning possible. Operation is done via a Siemens PLC with touch panel. 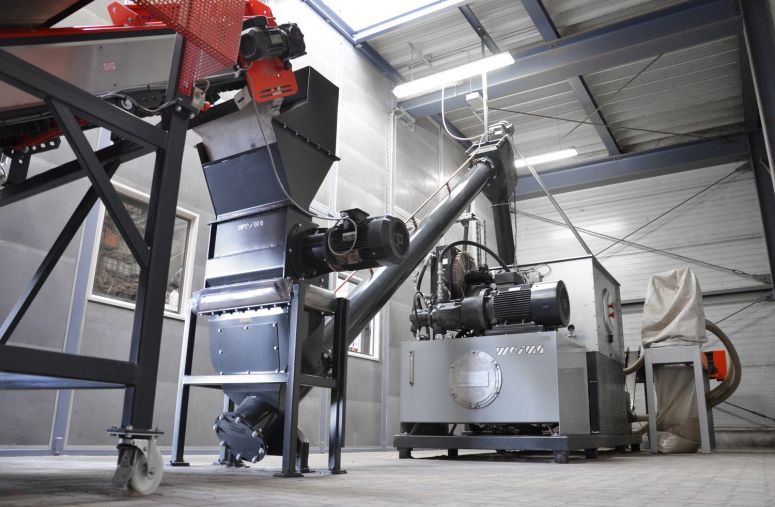 The packing process starts once the waste wood has been successfully pressed into briquettes. This is done by up to six workers who handle by themselves all the steps from the filling of the plastic bags, the stacking and preparation for transport of the packed briquettes onto Euro-pallets. The final step, the storage of the valuable heating material, is done next in the adjacent warehouse. 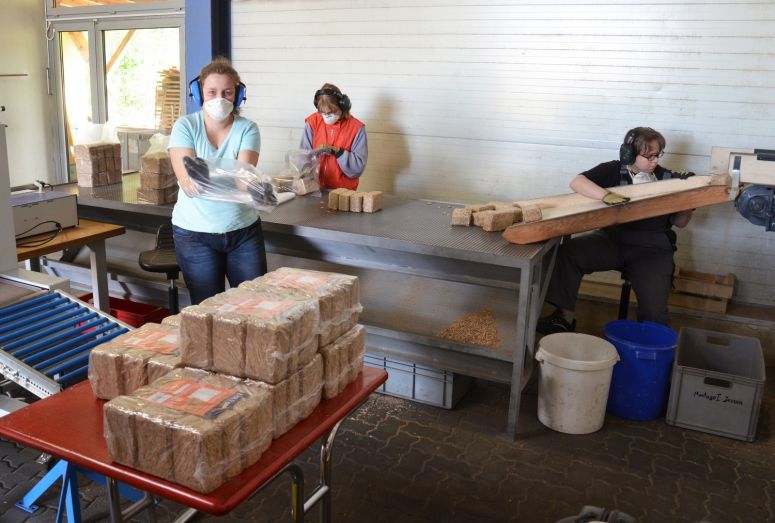 The summary of the Augustinuswerk: “Thanks to the good cooperation with companies and our experience of WEIMA it was possible to set up a unit that was profitable from the very beginning and represents an efficient expansion of the location.”

WEIMA is proud of having been a part of this ambitious project. It is not just the recycling of the wooden pallets that become a CO2-neutral energy source and so help the environment in a sustainable way that provides a good feeling. In addition, the production of briquettes in Jessen gives handicapped people the ability to take an active part in life and to (re)enter the world of work.